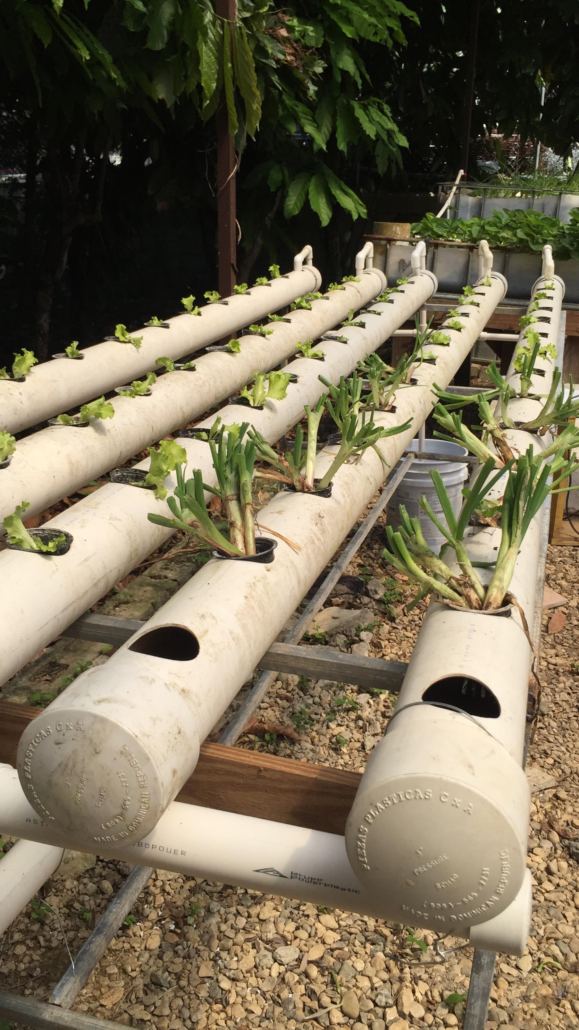 What Inspired Our NFT Hydroponics System?

At Taino Farm, we constantly explore new alternatives to enhance our sustainability and knowledge of agrotech (agricultural technology). Among many projects which give us pride, our NFT hydroponics system is the newest member of our food-producing family. We first noticed the strawberries grown in our aquaponics system garnering sizable attention. They are sweet, a beautiful tinge of red, and photogenic. Tourists pass the entrance of the farm flocking toward the beautiful fruit as Billy (the head honcho at Taino Farm) exposes the strawberries' hiding place under the dense green foliage. Everyone eagerly extends a hand to try Taino Farm's delicious delight, and after a handful of tours and sweet-toothed travelers have visited the farm, the plants are picked bare. The interest in the strawberries inspired our newest project - the NFT (nutrient film technique) system, which also sits near the entrance of Taino Farm and is now one of the first things you will see on our tour.

Why an NFT Hydroponics System?

Hydroponic systems have many blueprints, but through trial and error, Taino Farm discovered that the NFT hydroponics system uses the least amount of water, electricity, and construction material. The NFT hydroponics system is also the most economic to construct. As the most sustainable and affordable option available, it checked both of our boxes, and we proceeded to gather the materials.

Besides the economic incentive, our previous NFT system already had half of the material we needed to create the new one. The previous model worked well but had a few design flaws based on its location; the vertical layout did not maximize or evenly distribute the solar exposure and the cascade effect of a vertical setup caused the plants furthest from the pump to lack nutrition. Billy mentioned that if he hadn't started the aquaponics system 10 years prior, Taino Farm would be full of NFT systems instead of the long concrete beds that we use in tandem with our tilapia to cultivate our vegetables today. Even better, the solar panels we have in place would have been more than enough to cover the energy requirements the NFT system demands.

The NFT hydroponics system is so effortless to build due to the principal material being PVC pipe, which is affordable and durable. Our experience on the farm demonstrates that 1.5-inch PVC yields a solid decade of production before excessive damage occurs. The wooden or metal structure required to mount the system usually deteriorates before the pipes due to the intense humidity in the Dominican Republic. When building your own system, consider your proximity to the ocean as well, as saltwater damages the exterior surfaces faster than humid climates alone.

We used a recycled metal rack 4 feet in height which creates a comfortable distance to stand and work with the plants. Due to the slight decline at the entrance of the farm, we placed tiles underneath one side to level the system and ensure each tube receives equal amounts of water. The tank is a plastic 5-gallon bucket. Any recycled bucket from a construction site or repair project involving plaster, cement, or other liquid will suffice.

Our pump has a capacity of 30 watts. Due to the height of our system being above one meter, we lose a few watts of power, placing our output anywhere from 20 to 25 watts.

Each pipe will pass through a tap before pouring into the tubes holding the plants. The tap controls the amount of water dispensed into the tubes, if the system is not completely level, you can adjust the tap to balance the water distribution in each tube. At the end of the tubes, we used small pieces cut from a rubber hose to regulate the water level as it drains. The ideal water level is less than half of the basket holding your plant, thus exposing just the roots to the nutrient-rich water. Another wider 3-inch PVC pipe collects the water as it flows out from the five tubes. This pipe angles at a slight decline back into the tank to complete our circular loop nourishing the roots of the plants. 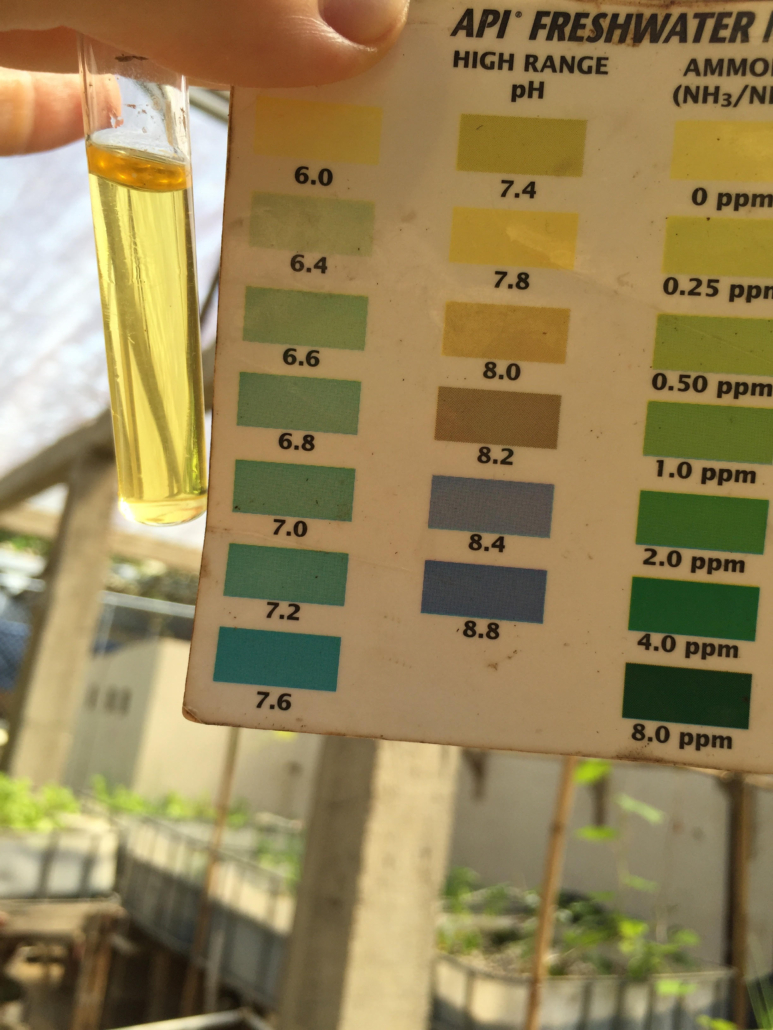 Maintenance of the NFT Hydroponics System

Unlike the aquaponics system, the NFT setup does not have fish excrement to give life to the plants. The plants need nutrients from daily feeding, which instead comes from an external source. At Taino Farm, we have access to our mineralized water tank produced by the tilapia in the aquaponics system. This water contains high levels of calcium, iron, and other essential elements conducive to growing vegetables in the Dominican Republic's climate. Depending on the climate and which vegetables you would like to grow, the nutrients necessary to yield a bountiful harvest will vary. This final and never-ending step is the most challenging part of the entire process. Expect plenty of trial and error when searching for the right nutrients and creating a stable biome within the NFT hydroponics system.